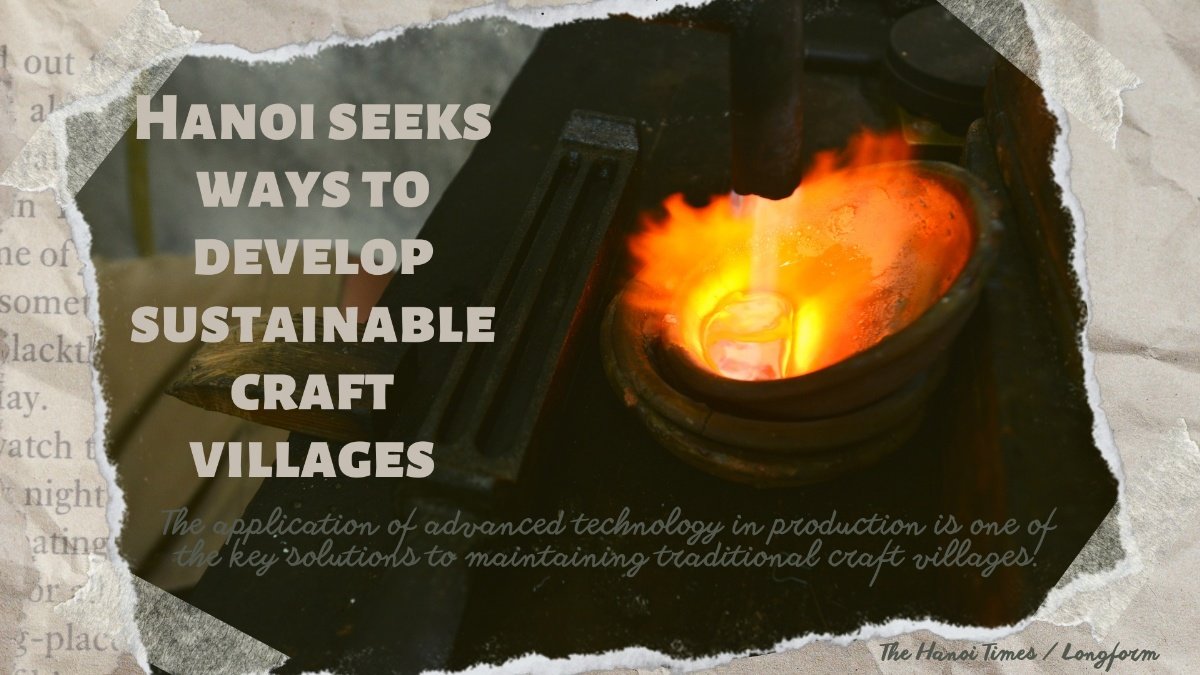 Nhat Khanh 11:05, 2022/08/04
The application of advanced technology in production is one of the key solutions to maintaining traditional craft villages.

Despite its important contribution to the rural economy, the sustainable development of craft villages in Hanoi is facing great challenges that require comprehensive solutions from relevant agencies and stakeholders.

Van Phuc, about 15km far from Hanoi, is known as a famous silk craft village both nationally and abroad. However,  many silk weavers have switched to other lucrative jobs due to rapid urbanization.

"The number of looms in Van Phuc Village had decreased from more than 500 looms in 2001 to about 300 today. Skilled silk weavers are aging, while young villagers are not interested in the traditional trade," said Pham Khac Ha, chairman of the Van Phuc Silk Weaving Villages Association in Ha Dong District.

The people of the centuries-old Phu Vinh Bamboo and Rattan Craft Village, Chuong My District used to lead a prosperous life thanks to the exports of bamboo and rattan products. However, in recent times, the craft village has faced many difficulties, including a growing shortage of raw materials for production, elite craftsman Nguyen Van Trung told The Hanoi Times.

“In the past, it was easy to purchase rattan from the northern mountainous provinces, but now we have to import raw materials from Laos, Cambodia, and Indonesia, leading to rising production costs,” he added.

According to Le Quang Phap of Hanoi University of Industry, the production and business methods of craft villages are no longer suitable for the industrial production model and are not competitive. Income from traditional occupations does not guarantee them a stable life. "Therefore, young people tend to study other careers and do other jobs, even in some craft villages, they only consider  traditional occupation as part-time work," he said.

Suggesting solutions to develop craft villages for Hanoi, Tran Nhat Lam, Vice Chief of National Coordination Office of the National Target Program on New Rural Development said that the city needs to continue reviewing mechanisms and policies to promote the development of rural industries, of which each craft villages should build their own development plan.

Echoing Lam, Chu Phu My, Director of the Hanoi Department of Agriculture and Rural Development, told The Hanoi Times: “In the current urbanization trend, the disappearance of rural trades is inevitable. Along with the efforts of the city, craft villages need to change to adapt to the requirements of the market both in terms of quality and product design.”

In order to upgrade products of craft villages, one of the solutions is to step up the application of science and technology in production activities, especially in the fields of preservation and processing of agricultural and forestry products and handicrafts, he added.

Besides, the city will promote the cultural values of craft villages in association with the development of products under the One Commune One Product (OCOP) program, as well as community and rural tourism activities. These are among the efforts to preserve and develop craft villages and rural trades in the capital in the 2022-2025 period.

Hanoi has planned to organize a traditional craft village festival later in the year, which is expected to be an annual event, helping promote the products of artisan villages around the world".

With 1,350 traditional craft villages, the city is home to the largest number of craft villages and artisans in the country. Hanoi is expected to become a manufacturing hub for handicraft gifts in Vietnam, Ha Thi Vinh, Chairwoman of the Hanoi Association of Handicrafts and Crafts told The Hanoi Times.

"Three departments of Agriculture and Rural Development, Industry and Commerce and Tourism must shake hands to find ways to realize this plan," she proposed.

According to the Hanoi Rural Development Sub-Department, the capital city has more than 800 craft villages, of which 23 districts and towns have been recognized by the Hanoi People’s Committee. Each craft village has its own identity, creating unique and sophisticated products imbued with national cultural identity. Especially, products of garments, ceramics, traditional embroidery, wood carving, and mechanical engineering have competitive edge in the domestic and foreign markets.

Besides, the city will strengthen vocational training to maintain and develop the workforce and the contingent of artisans as well as training on environmental protection and handling pollution.

According to the municipal People’s Committee's latest plan, handicrafts exports are expected to increase by an average of 5-8% per year, reaching $550 million by 2025.

16:58, 2022/58/26
Trade ministry eyes Vietnam’s exports to end 2022 on a high note
A diversified network of free trade agreements (FTAs) that Vietnam is a part of serves as a significant boost for the country's exports.

18:21, 2022/21/23
US businesses eye digitalization, energy transition in Vietnam
They share the view that Vietnam remains among the most attractive market in Southeast Asia for those looking for stability and diversification of supply chains.

14:28, 2022/28/22
Hanoi OCOP fair to improve brand recognition
Different stakeholders joining the week-long exhibition are expected to strengthen linkages in the value chain and consumption of the One Commune One Product (OCOP) products.

13:47, 2022/47/21
Vietnam’s strong economic fundamentals drive favorable outlook: ADB
Vietnam’s economy recovered faster than expected in the first half of 2022 and continues to grow amid the challenging global environment.